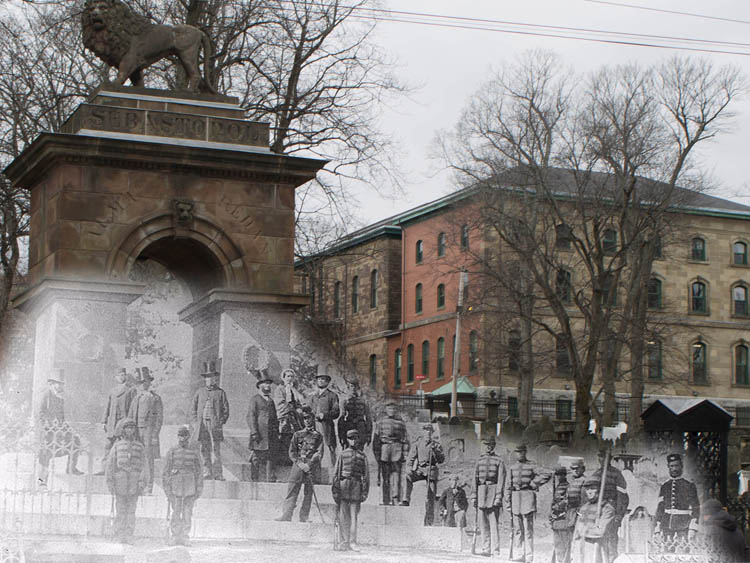 The inauguration of the Welsford-Parker Monument at the Old Burying Ground which commemorates Captain William Parker and Major Augustus Welsford, Nova Scotians who died in the Crimean War. The war fought in Russia between 1854 and 1856. This is one of the earliest photographs taken outdoors in Halifax that has survived to this day.

Farmers bringing their goods to market day on George Street.

Men on horseback on Grand Parade in front of Halifax's City Hall.

Members of Halifax's police department pose for a photo on the Grand Parade after a day of first aid training.

Halifax Relief Commission Nova Scotia Archives accession no. 1976-166 no. 64 & On This Spot Enterprises

Coffins stacked outside the Snow and Co. undertakers on Argyle Street in preparation to receive the dead in the aftermath of the Halifax Explosion.

American relief workers, likely members of Harvard's medical team, pose for a photo outside the American relief hospital in the aftermath of the Halifax explosion. The hospital was located at Spring Garden Road and Queen Street, and the Nova Scotia Technical College can be seen in the background.

Children make the most of a horrible winter by tobogganing down Halifax Street just after the Halifax Explosion.

A streetcar trundles down busy Barrington Street, one of 59 such Birney trams servicing Halifax around the time.

A view down Barrington Street at the intersection of Prince Street.

British flags and bunting are draped over the Capital Building on Barrington Street to make the Royal Visit on 15 June 1939.

Members of the Canadian Women's Auxiliary Corps stand at attention in the Grand Parade in front of City Hall.

Pallbearers carry the casket of Premier Angus L. Macdonald out of St. Mary's Cathedral where it had been lying in state.