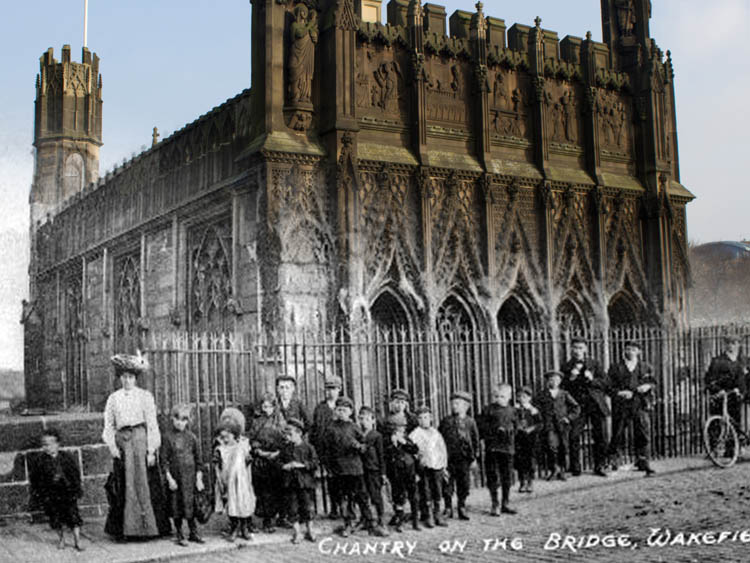 Medieval Wakefield gained a reputation as the "Merrie City," where "a right honest man shall fare well for two pence a meal." It expanded around a thriving market set up at the beginning of the 13th Century under the shadow of Sandal Castle, founded a little earlier. Bouyed by inland trade on the navigable Calder, the town was the scene of important events during the Wars of the Roses and the English Civil War. Wool, cattle and grain traders were drawn to Wakefield and the city prospered. As the Industrial Revolution transformed the landscape, wool spinning mills were set up by the river and powered by weirs. Breweries, coal mines and shipyards sprang up around the town. In the 1970s and 80s these industries faded away, and Wakefield was left with the difficult task of transitioning to a post-industrial economy. As such the government has embarked on ambitious building projects, like the Trinity Walk, the Ridings Shopping Centre and the Hepworth Wakefield. The Then pictures used here are reproduced from Wakefield Council's Online Museum Collections. I took the Now photos in March 2015.

A rather brooding view of the Chantry Chapel which was originally completed in 1356, just after the Black Death. When wealthy people died in the Middle Ages they often set aside a portion of their inheritance for the construction of a chantry chapel where a priest would say a set number of prayers over a set number of years for the soul of the deceased. Wakefield originally had four such chapels, but this is the only one to survive as its foundations were crucial to the integrity of the bridge.

Some people in front of the Chantry Chapel. The chapel is the oldest surviving bridge chapel in England. The original medieval facade was placed in Kettlethorpe Hall in the 1830s and the facade we see here was made of stone susceptible to degradation from pollution. It has since been restored.

This fascinating photo was taken during the demolition of some homes on Bull Ring. We can see the cross-section of a 19th Century house that has been built directly on top of a smaller medieval home. Notice the huge variety of building materials as well. On the right is the Black Swan Pub.

The fire brigade poses on their horse-drawn fire engine outside the Orangery, an 18th Century garden building for social events. Riding to a fire at breakneck speed on an engine like that must have been a frightening proposition.

Wakefield's Air Raid Precaution volunteers demonstrate the effectiveness of their fire hoses on Thornes Lane Wharf. Today the wharf has fallen into disrepair.

Carts outside the original Grey Horse Pub building on Kirkgate. They are raising money for the Royal Navy Lifeboat Institution, a search and rescue charity that has saved an estimated 140,000 lives since its creation in 1824.

The famous Tudor-era Six Chimneys Pub on Kirkgate. The owners had been removing support beams to increase floor space and evidently they had taken one too many, with the result we see here. This venerable Wakefield institution has since been replaced with this brown building, while a Wetherspoon's up the street has appropriated the Six Chimneys name.

A view up Kirkgate towards Warrengate. Few of the original buildings survive as all those on the left were demolished and the street widened to make way for the apartment buildings.

Wakefield's Cathedral in the midst an extension project. It is difficult to put a precise date on this building original construction because it has been the site of a church since at least Anglo-Saxon times. It has been refurbished, renovated and rebuilt many times over the centuries.

A solemn procession leaves the Cathedral after the consecration of the newly-built Saint Mark's Chapel.

The alley that once existed between Cross Square and Northgate was called Butcher's Row.

A particularly old photo of Cross Square. Most of the street has been extensively redeveloped and the Market Cross structure demolished.

A bobby directs traffic at the foot of Cross Square.

A view over the weir towards the Chantry Bridge.

A drawing of Sandal Castle made during the reign of Elizabeth I. This was my best guess at the site of the gate. The fields in front of the castle were the scene of the bitterly contested Battle of Wakefield during the Wars of the Roses in 1460. The Duke of York sortied from the castle to meet the massing Lancastrian army. His army quickly found itself cut off from the castle and was annihilated. Many refugees from his army fled as far as the chantry bridge before being caught and killed. The Duke of York's head was taken and somewhat ironically mounted on the Mickelgate Bar at York.

Sandal Castle's moat. The castle was destroyed by Parliamentary forces during the English Civil War and left to fall into ruin.

Some children enjoy a day out on the ruins of Sandal Castle. The mounds of earth indicate the castle had not yet been excavated.