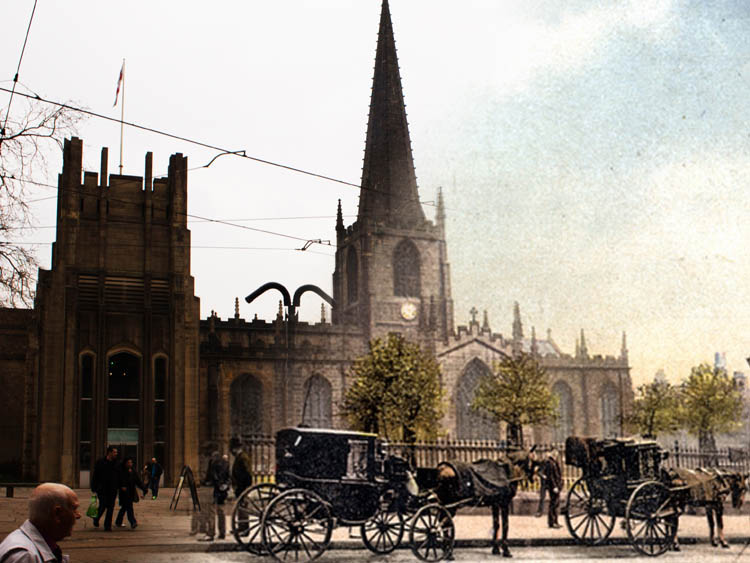 Sheffield was a quiet market town for most of the 1,500 or so years of its history, renowned primarily for the fine quality of the knives and cutlery manufactured there. It was this cutting edge of knowledge and skills cultivated by the Sheffield cutlers that would form the seed of the town's rise to industrial prominence in the 18th and 19th Centuries. Sheffielders invented crucible steel, an improved process of making steel, and Sheffield Plate, a way to fuse thin sheets of steel to copper to make fine silverware. Henry Bessemer pioneered the process for making even better steel in Sheffield. In short order water-powered mills on the Rivers Sheaf and Don were churning out world-renowned steel and cutlery. The population grew rapidly from around 30,000 in 1800 to 500,000 by 1920. A vibrant city centre developed and impressive pieces of architecture were erected, like the Town Hall and Cutler's Hall. The distinctive culture of Sheffield began to form, which included the founding of the Sheffield Football Club in 1857, the oldest such club in the world. The hills that ring Sheffield acted as a geographic barrier to the city's further expansion and capped the city's population at around half a million people, while strengthening the roots that tied many of the city's inhabitants to their homes, moreso than is the case with most other English cities. Like every other corner of the United Kingdom, Sheffield was deeply affected by the World Wars. Tens of thousands of Sheffielders left the steel mills to fight and die in the trenches. In 1940 two nights of devastating German bombing gutted large parts of the city centre. Then after the 1973 Oil Crisis the heavy industry around Sheffield went into rapid decline. As the heavy industry melted away, taking thousands of jobs with it, many areas of the city began to decay. Urban blight became commonplace and the population even shrank. The movie The Full Monty chronicles the struggles of several laid off Sheffield steel workers who must resort to stripping to make ends meet. Recovery from this global economic realignment has been slow, but the city has indeed recovered. In the 1990s and 2000s the population grew again and even surpassed its previous highs, while the launch of ambitious development projects like Sheffield One have succeeded in regenerating the city centre. Sheffield is once again a booming city with a bright future. The Then photos are reproduced courtesy of the Picture Sheffield online archives. I took the Now photos in March 2015.

Hansom cabs await outside Sheffield Cathedral in this postcard. This particular cathedral was build in 1280 and dedicated to Saints Peter and Paul and underwent radical redesigns throughout the 20th Century. The concrete lantern tower seen at the left of my photo was added in 1998.

The decaying ruins of Sheffield's industrial past are present all along the River Don. Tree roots are now tangled in the bricks of once bustling industrial enerprises. A series of weirs powered steel mills all around Attercliffe, including this one just west of Washford Bridge. The spot is now accessible through the tranquil Five Weirs Walk. This spot across the river is now apparently an auto wreckers.

This grainy photo gives us a fascinating glimpse into the Moor's past. It's a lively street scene, where there are far more pedestrians in the street than vehicles, and the most prominent one on the right appears to be a horse-tram on rails. The most interesting parts of the photo centre stage: the fashionably dressed Victorian woman pushing a stroller across the street, while in front of her appears a young boy accompanied by his giant shaggy dog. He looks like he might be selling newspapers.

An early photo of a dramatically different Pinstone Street. I wouldn't have been able to find the spot if they hadn't begun construction on the building on the left when the original photo was taken. On the right is Saint Paul's Church, which was demolished in 1938 after the clearing of slums in the surrounding areas had shrunk its congregation. On the centre-left we can see that the Town Hall hasn't been built yet. It would not be completed until 1897.

A lively day in 1897 when Queen Victoria was coming to town. This is a view up Cambridge Street from the Moor. Flags, pennants and all sorts of decorations have been erected around the city centre, while everyone is out and about. In the centre the two men appear to be having a lively conversation while on the right a father is taking his smartly dressed daughter out for a day of festivities.

A rainy day on Pinstone Street. The milk man doesn't appear perturbed by the inclement weather.

The iconic neo-Gothic style Town Hall that was completed in 1897. On the right can be seen a statue of Queen Victoria, which was moved to Endcliffe Park in 1930.

The Duke of York visits the Town Hall. As he is departing he looks like he is getting mobbed by a troop of eager Boy Scouts.

A huge crowd gathers in Barker's Pool on Armistice Day. Many of the men here will be veterans of the trenches. At the same time restoration work on the City Hall is underway.

A rather solemn crowd gathers at the City Hall on VE Day. They appear to be singing a hymn. Reminders of the war are everywhere in Sheffield. Even in the background of this photo the shrapnel scars from German bombs are thrown into sharp relief on the middle pillars of the City Hall.

A parade advertising Sanger's Circus marches down Upper Hanover Street. I'm reasonably confident I have the right spot (the reference point being the steeple of St. Andrew's on the left), though the area has been heavily redeveloped to make way for heavier traffic (which you can see is gridlocked in my photo).

Women and children have lined up with pails to receive water from the water delivery man on Southgrove Road in Broomhill. The fashions are fascinating here along with the hoop the boy is carrying. I'm confident this is the right spot as the church steeple is still at the same angle on the left, though it is now blocked by homes.

The Bear Pit in the Sheffield Botanical Gardens. Curious onlookers could look down on bears trying to go about their lives in this tiny enclosure. A nearby plaque claims the bears were removed when a boy fell in and was "savaged".

Workers are hard at work repairing streetcar rails on a busy Fargate.

Firefighters work to put out a fire at the Surrey Theatre on West Bar, just north of the downtown core. It looks like they're too late to save the building.

The Washford Bridge over the Don leading into Attercliffe. A ford over the river since ancient times, the current stone bridge is over 200 years old. This entire area was densely developed with heavy industry until the very recent past.

Picture Sheffield Reference u04635 & On This Spot Enterprises

Another shot of the Washford Bridge over the Don.

A fascinating sketch of the Cyclops Steelworks on Savile Street. It was drawn from the perspective of Carlisle Street in Brightside. Railways run in front of the warehouse but in front of that that the land has not been developed at all save as pasture for cattle. The smoke from the steelworks in the old photo clouds out the hills we can see in the background of the now photo.

A truck zooms down Attercliffe Road.

The Blonk Street Bridge seen from Lady's Bridge. On the left was Huntsman's Forge, amongst other industrial works. Now it is an office block.

An arch set up on Blonk Street to commemorate Queen Victoria's visit to Sheffield. You can see the roof peaks of the two buildings still there today through the arch. Triumphal arches erected temporarily to mark special occasions were an extremely popular tradition that is all but forgotten today.

The Yellow Lion Hotel on Haymarket.

A car speeds along Sheaf Street at the junction of Paternoster Row and Leadmill Row. In the background can be seen a traffic sign for the A61 as well as ads for whiskey, beer and H.P. sauce.

The old post office in Fitzalan Square. The cab stand in the middle of the square was demolished to make way for the statue of King Edward VII in 1913.

On the nights of 12 and 15 December 1940, German bombers aiming for the extensive steelworks in the city's East End missed their targets and pummeled Sheffield's city centre instead. These two nights became known as the Sheffield Blitz, killing 660 and leaving 40,000 homeless. On the first night many people sought refuge in the cellar of the Marples Hotel in Fitzalan Square. Sadly, the hotel took a direct hit, killing at least 70 people. In this photo we can see exhausted-looking rescue workers searching for survivors in the hotel's rubble.

A collection of horse-drawn hansom cabs wait at the taxi-stand outside Sheffield Railway Station the same year the stone facade was built. The water feature on the left of my photo, known as 'Cutting Edge', was added in 2006 as part of a redesign of Sheaf Square. 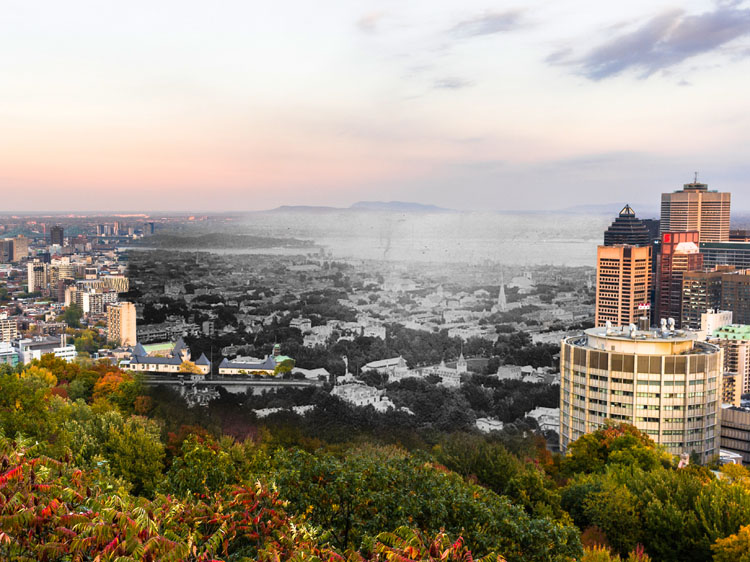