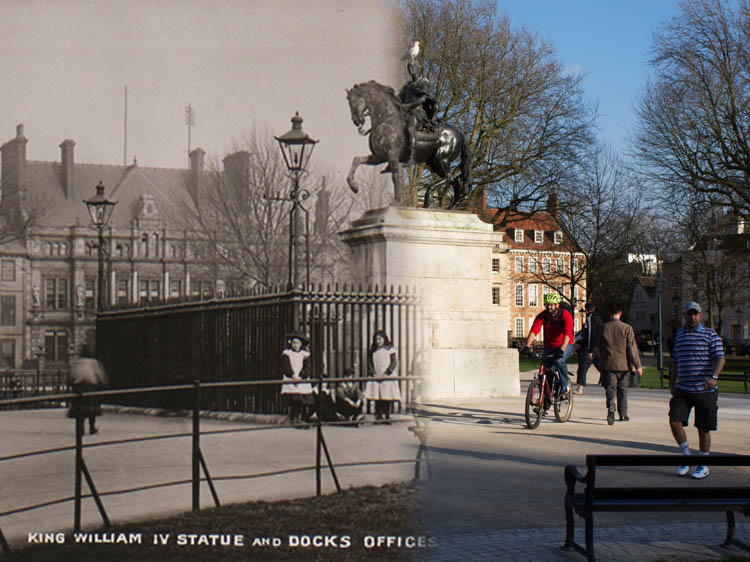 During the Middle Ages the picturesque town of Bristol was the third largest in the entire British Isles. In these distant centuries, during the Viking and Saxon Era, the town was an inland port that thrived on the trade of wool, fish and slaves captured in Wales and the north of England. Bristol reached the height of its prosperity and importance from the 15th to the 18th Centuries. In 1497, five years after Columbus sailed for the New World, John Cabot sailed from Bristol in search of a new route to the Orient. He found Newfoundland, the first European in the modern age of Exploration to lay eyes on North America. The cod off the the Canadian coast, he wrote, were "so thick they stayed the progress of our ship," a historic event remembered in Canada to this day. In the centuries to follow Bristol-based merchantmen and warships plied the Atlantic while the port itself became a central hub in Britain's rapidly growing and globalizing trade networks. Much of Bristol's wealth came from the slave trade and Bristolean merchants are thought to have ferried over a half million Africans across the Atlantic and into slavery in the Americas — over 2,000 voyages in total. Today tourism brochures focus less on this seedy past and more on how it ended, and the Seven Stars Pub, whose owner harboured the famous abolitionist Thomas Clarkson at great personal risk, is a major attraction. Abolition of the slave trade in 1806 pulled out the main prop of the city's prosperity, and over the course of the 19th Century the city declined in relative importance to that rising port in the north, Liverpool, which was so much closer to the great industrializing regions in the Midlands and Lancashire. Bristol again began to hit its stride in the 20th Century when it became an early centre of British aircraft innovation and design. In 1910 the British and Colonial Aeroplane Company (later the Bristol Aeroplane Company) was founded here and soon became one of the country's primary aircraft manufacturers. The company's descendant today is BAE Systems. Bristol's maritime past has contributed to its open and diverse culture and today trendy neighbourhoods like Stoke's Croft are known throughout the U.K. for their underground music and art scenes and thriving youth culture. Bristol is a wonderfully beautiful city, my favourite when visiting the whole British Isles, and I should hope to return again soon.

The rowboat in the foreground is the Mardyke Ferry ferrying several people across the canal. The harbour was much more busy that day than it was the day I took my photo. Paddle steamers abound, many likely used for pleasure cruises out into the Bristol Channel. If you look carefully you can see a remarkable number of the buildings on the hill have remained in place over the decades.

The small "Severn Traveller" slides down the slipway at the Albion Shipyards. These shipyards focussed mostly on smaller ships that would ply the waterways around Bristol. Today the shipyards have been supplanted by the Bristol Marina.

On May 23 1917, the SS Chicago City was struck by a torpedo from a German U-boat off the coast of Ireland. Despite the dramatic damage to the ship, her crew were able to keep the ship afloat and she limped into Bristol port, a dramatic feat of seamanship. Here she is in Albion Dock for repairs, men gazing through the unbelievably large hole the torpedo left in her hull.

The cathedral dominates the skyline from this shot taken at the intersection of Narrow Quay and the Grove. The canal is filled with shipping including a steamer and a collier.

The ship "Marquis of Lorne" noses through a channel towards the swing bridge on its way out of the Floating Harbour. The dock cottages on the left have remained unchanged.

Crowds have gathered to watch the launch of the merchantman Lorentz W Hansen at Albion Shipyards. Today this is the Bristol Marina.

An engraving of Bristol Cathedral whose construction extended between the 13th Century and the 19th.

Children pose in front of the famous bronze statue of King William III in Queen Square. It was erected in 1736 and to this day is considered one of the best examples of equestrian statuary in Britain.

Also in Queens Square is an engraving showing homes destroyed in the riots of 1831. The riots were prompted by the defeat of the second Reform Bill that would have redistributed parliamentary representation towards fast-growing cities like Bristol. The rioters burned the local magistrate's Mansion House in Queen's Square and had to be violently dispersed by units of dragoons. I'm not so sure the trees there today are the same in the engraving, but it is certainly tempting to think they so.

1920s View up Redcliff Hill, complete with women on bicycles - a fairly unusual sight in those days! All the women appear to be wearing the trendiest of hats - not surprising as Bristol had over one hundred milliners. The many little shops and businesses that lined the street are now a distant memory as the city council flattened them; road-widening was the reason given to provide greater flow between Bedminster and the Centre. Among the variety of shops were chemists, wine merchants and a fondly-remembered seller of hot peas and faggots. The sign of A.E. Orchard, (purveyor to the King and HRH The Prince of Wales) denotes his butcher's shop.

Just behind Temple Meads Station is this stretch of canal lined with abandoned warehouses and cracking pavement. Once upon a time there was a steam crane and wharf here belonging to the Bristol Gas Company.

Men load a barge at the Lysaghts Works on one of the Floating Harbour's canals, just opposite Feeder Road.

This school for girls once stood on Thrissell Lane. It opened in 1831 before burning down in 1854 before being rebuilt and reopened later that year. I'm not entirely sure what happened to it, but clearly something happened.

This was Lawford's prison. It was built in the 1780s and demolished shortly after this photo was taken, in 1907.

The Ostrich Inn has been serving beer to Bristolean mariners since 1745.

Following the devastating riots of 1831, Quakers took it upon themselves to build a new public hospital to help the poor and infirm. The new facility overlooking Bathurst Basin was a huge success, and a new larger hospital opened in 1853, the one you see here. The French-style roofs have been removed and today the building is undergoing some restoration work. During the Great War the hospital was used to treat wounded soldiers.

This is the original iron bridge that stood at the crossing over the Avon and led up to Redcliffe Hill. The bridge we see today was actually built only two years later in 1809. Unfortunately I wasn't able to get a very good angle for the shot.

St. Paul's Church in Bedminster. Built in 1829, the architectural differences between the then and the now can be explained by German bombs. The church was largely wrecked in 1941 and rebuilt on a slightly different design in 1956.

Children stand in the road and gawk at the camera in this postcard view of Hotwells Road. The Bear Pub is still there, on the right. The buildings on the left were demolished to widen the road.

People pose for a photo in front of Holy Trinity Church in Hotwells. The building was largely destroyed by German bombs in 1941, but restored to its original state in the 1950s. The little sapling to the left of the door apparently survived the bombing and has continued growing ever since.

The original Temple Meads station, designed by Isambard K Brunel and built in 1840. Coaches are pulling up to the station picking up and dropping off passengers. Riding the train must have still been quite a novel experience at this point.

In the 1870s Temple Meads was renovated and expanded. This instantly recognizable building was part of that expansion.

This is an engraving of Bristol as seen from St. Anne's. It is a peaceful pastoral scene and you can see the weir on the right and on the left an early train chugs across the bridge over the Avon. The spot where the artist was sitting is now a cluster of warehouses and it was impossible for me to get a view of the city from the exact spot. I took my photo just slightly downriver looking in the same direction, and you can see the same railway bridge on the right side of my photo. 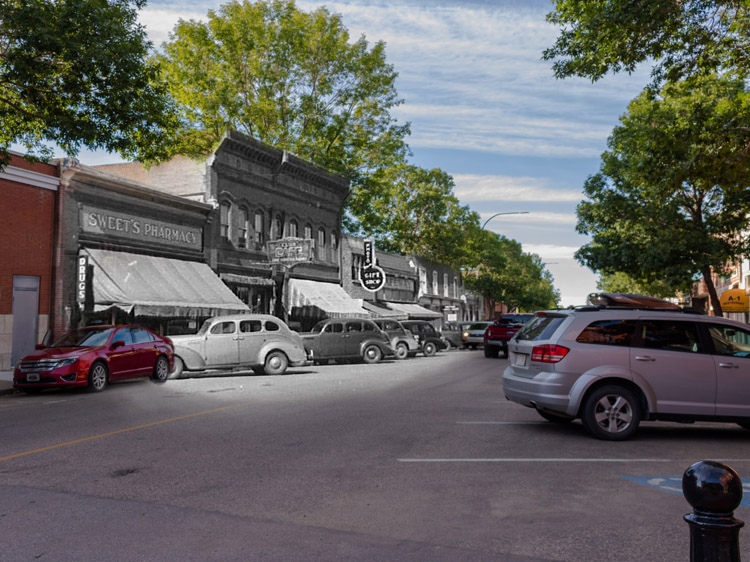 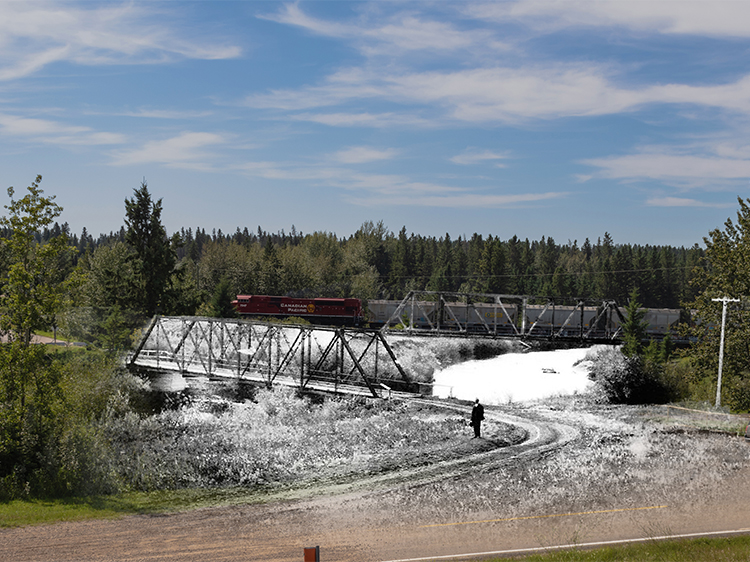