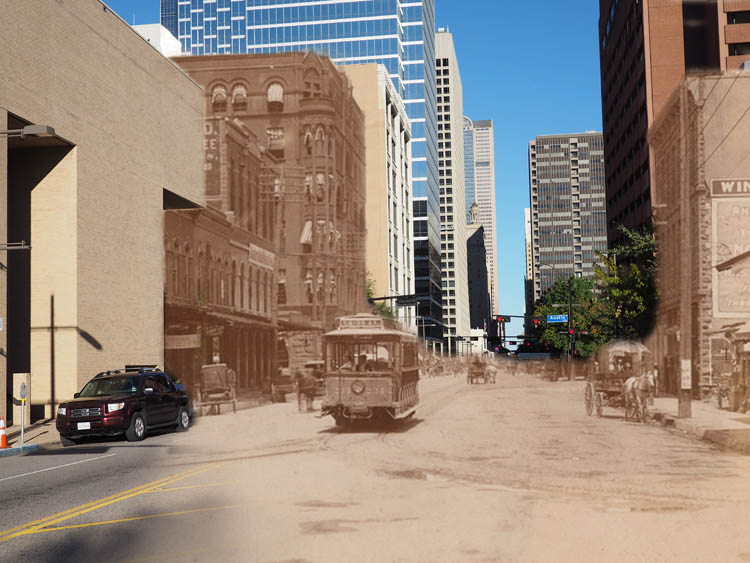 The meteoric rise of Dallas over the 175 years of its history is nothing short of breathtaking. The city’s enterprising inhabitants have led the world in a succeeding range of fields, from ranching to oil extraction, manufacturing and high technology, vastly enriching the city and shaping the skyline we see today. Though the city has endured dark days of depression, assassinations, wars and racism, the economic triumph of Dallas can be seen in the imperious towers that dominate the city’s skyline today. Before Dallas was the metropolis we know today, it spent thousands of years as home to the indigenous Caddo people and their farmsteads and hamlets dotted the region. The region was claimed by the Spanish in the late 1500s, but this was a claim in name only, and for hundreds of years only the odd adventure-seeking European passed through the region. It was only in the mid-19th Century, a couple years after Texas declared independence from Mexico, that the first permanent European settlers arrived at the side of the Trinity River, led by the enterprising John Neely Bryan. In 1841 he founded what would become Dallay, and for years it remained little more than a tiny far-flung outpost of Euro-American settlement, continuing in this modest manner for some time after Texas was incorporated into the United States in 1845. Gradually the town grew on the eastern bank of the Trinity River. At the outbreak of the Civil War, the 1,000 or so voting inhabitants of the town voted resoundingly in favour of secession from the United States. Dallas itself was not drastically affected by the course of the war, but Reconstruction and the emancipation of the slaves changed the cultural landscape, with black Freedmen’s towns popping up around the region. The arrival of both a north-south and east-west railway in 1872 was a watershed moment in the city’s history, and the population more than doubled in the course of a single year. Dallas had begun its meteoric rise to prominence as the main commercial and transportation hub of eastern Texas. By 1890 it was the most populous city in the state, and in this period of prosperity (barring the Depression of the mid-1890s) many of the older buildings we can see in this photo essay were erected, such as the ‘Old Red’ courthouse. Dallas in the early 20th Century wasn’t just a hub for commerce and railways, it also became a place of high fashion and ambitious architecture. Buildings like the Neiman Marcus department store attest to the city’s affluence and stature. The discovery of oil in the 1930s enriched the city’s inhabitants and prompted the construction of imposing and impressive corporate headquarters in the downtown core. Manufacturing and high technology innovation helped continue the city’s economic rise throughout the latter half of the 20th Century, though the Savings and Loan Crisis of the 1980s had a catastrophic effect on the city’s economy. Dallas’s corporate success has shaped the look and feel of the downtown core. As we can see from the photos in this essay, the quaint Old West-style streets and store fronts have been erased in favour of towering corporate headquarters, and indeed one has to dig deep to find traces of much evidence of Dallas’s history. The Now photos are courtesy of Texas photographer Jason Ali, while the Then photos are reproduced from the Southern Methodist University collection, the University of Houston Library Collection, and Christian Spencer Anderson’s Flickr page.

From the Southern Methodist University Collection & On This Spot Enterprises

Difficult as it may be to believe, this is the exact same view looking down Main Street, east from Griffin Street. Dallas has changed dramatically over the past century and across the city few buildings from the city's early days remain. They have been replaced by massive towers of steel, glass and concrete who cast long shadows over the once lively and bustling streets.

From the Southern Methodist University Library Collection & On This Spot Enterprises

We can see in this view of Akard Street from 1898 that Dallas's transition from Western frontier town to metropolis is well underway, with well-built buildings and fashionable horse buggies are parked along the side of the road, but the streets are not yet paved and the automobile is not yet in evidence. Notice the railway tracks that are still the same.

A look down Evray Street from just by Stone Place. The building on the left has survived 115 years — even today you can still see the faded letters from the advertisement painted there. The building, the tallest at the time, has since been dwarfed by dozens of glass towers.

The facade of the fashionable Adolphus hotel shortly after its completion in 1912. Built by Adolphus Busch, the founder of the Anheuser-Busch beer empire, it was designed in the French-inspired Beaux Arts style of the early 20th Century.

From From the Southern Methodist University Collection & On This Spot Enterprises

From the Southern Methodist University Collection & On This Spot Enterprises

At the same arch we see here an ugly event in Dallas's history. Allen Brooks, a domestic labourer, was accused of attempting to rape his employer's 2-year-old daughter. During his arraignment a lynch mob burst into the courthouse and seized him, taking him to the arch and hanging him from it. The photo here is actually a postcard, one of a series of such souvenir lynching post cards popular at the time. There were postcards from 100 lynchings in the collection "Without Sanctuary" published by James Allen in 2001.

Streetcars ply Commerce Street in this postcard view from early 1900s. You can tell it's Texas because of the stetson worn by the man at the right.

From University of Houston Library Collection & On This Spot Enterprises

Another postcard view, this one of Dallas's romanesque courthouse. Built in 1892 and affectionately nick-named Old Red, it is one of the few old buildings surviving in Dallas's downtown core.

The bunting is out and the streets are packed for Elk Week on Ervay Street. The building on the right has not changed. Even as late as the 1920s there are not many cars on the roads.

A streetcar trundles down Main Street, between Austin and Market Streets. Streetcars traveled little faster than walking speed but were a common sight in most cities in the Western World up to the 1930s.

The famous Neiman Marcus flagship store. Originally built in 1914, it was originally designed in such a manner that more floors could be added on at a later date. This proved to be a prescient design decision, as two more floors were added in 1953, then another in 1959, then two more in the 1980s.

A photo from the Warren Commission showing the route taken by President Kennedy's motorcade on the day he was assassinated in 1963. The window on the book depository from which Oswald fired the fatal shots has been marked. 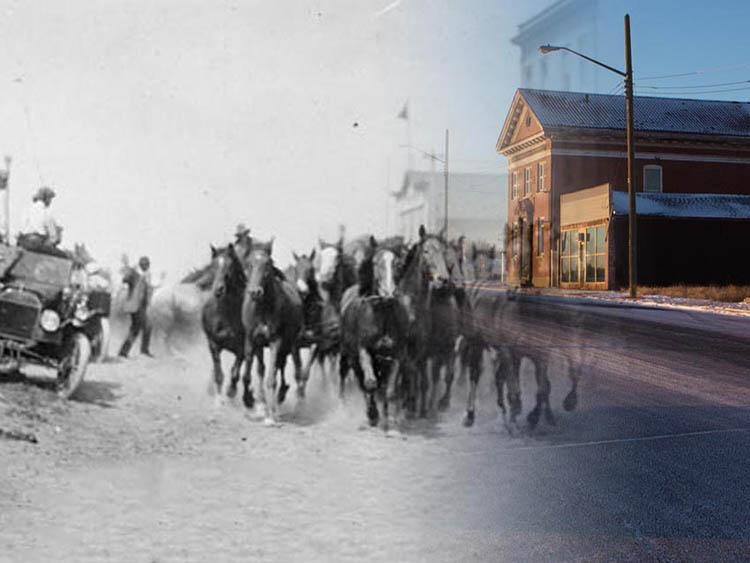